The country of Brazil occupies roughly half of South America, bordering the Atlantic ocean. 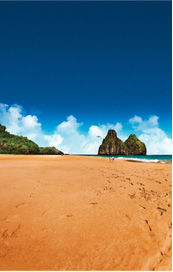 With its expansive territory, Brazil occupies most of the eastern part of the South American continent and its geographic heartland, as well as various islands in the Atlantic Ocean. The only countries in the world that are larger are Russia, Canada, the People’s Republic of China, and the United States (including Alaska). The national territory extends 4,395 kilometres (2,731 mi) from north to south (5ø16’20” N to 33ø44’32” S latitude) and 4,319 kilometres (2,684 mi) from east to west (34ø47’30” W to 73ø59’32” W longitude). It spans three time zones, the westernmost of which is one hour ahead of Eastern Standard Time in the United States. The time zone of the capital (Brasília) and of the most populated part of Brazil along the east coast (UTC-3) is two hours ahead of Eastern Standard Time, except when it is on its own daylight saving time, from October to February. The Atlantic islands are in the easternmost time zone.

Brazil possesses the archipelago of Fernando de Noronha, located 350 kilometres (217 mi) northeast of its “horn”, and several small islands and atolls in the Atlantic – Abrolhos, Atol das Rocas, Penedos de São Pedro e São Paulo, Trindade, and Martim Vaz. In the early 1970s, Brazil claimed a territorial sea extending 362 kilometres (225 mi) from the country’s shores, including those of the islands.

On Brazil’s east coast, the Atlantic coastline extends 7,367 kilometres (4,578 mi). In the west, in clockwise order from the south, Brazil has 15,719 kilometres (9,767 mi) of borders with Uruguay, Argentina, Paraguay, Bolivia, Peru, Colombia, Venezuela, Guyana, Suriname, and French Guiana. The only South American countries with which Brazil does not share borders are Chile and Ecuador. A few short sections are in question, but there are no true major boundary controversies with any of the neighbouring countries.

It has within it five eco-systems, the tropical rainforest, the pantanal, the cerrado, the mata atlantica and the pampas and surrounding areas. 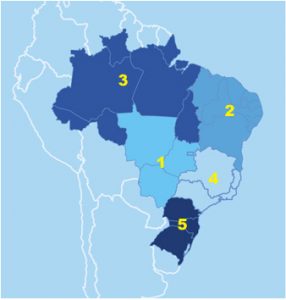 Brazil’s twenty-six states and the Federal District (Distrito Federal) are divided conventionally into five regions: North (Norte), Northeast (Nordeste), Southeast (Sudeste), South (Sul), and Centre-West (Centro-Oeste). In 1996 there were 5,581 municipalities (municípios), which have municipal governments. Many municipalities, which are comparable to United States counties, are in turn divided into districts (distritos), which do not have political or administrative autonomy. In 1995 there were 9,274 districts.

All municipal and district seats, regardless of size, are considered officially to be urban. For purely statistical purposes, the municipalities were grouped in 1990 into 559 micro-regions, which in turn constituted 136 meso-regions. This grouping modified the previous micro-regional division established in 1968, a division that was used to present census data for 1970, 1975, 1980, and 1985.

Each of the five major regions has a distinct ecosystem. Administrative boundaries do not necessarily coincide with ecological boundaries, however. In addition to differences in physical environment, patterns of economic activity and population settlement vary widely among the regions. The principal ecological characteristics of each of the five major regions, as well as their principal socio-economic and demographic features, are summarised below. 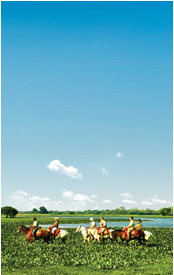 The Centre-West consists of the states of Goiás, Mato Grosso, and Mato Grosso do Sul (separated from Mato Grosso in 1979), as well as the Federal District, site of Brasília, the national capital. Until 1988 Goiás State included the area that then became the state of Tocantins in the North.

The Centre-West has 1,612,077 square kilometres (622,426 sq mi) and covers 18.9% of the national territory. Its main biome is the cerrado, the tropical savannah in which natural grassland is partly covered with twisted shrubs and small trees. The cerrado was used for low-density cattle-raising in the past but is now also used for soybean production. There are gallery forests along the rivers and streams and some larger areas of forest, most of which have been cleared for farming and livestock. In the north, the cerrado blends into tropical forest. It also includes the Pantanal wetlands in the west, known for their wildlife, especially aquatic birds and caymans. In the early 1980s, 33.6% of the region had been altered by anthropic activities, with a low of 9.3% in Mato Grosso and a high of 72.9% in Goiás (not including Tocantins). In 1996 the Centre-West region had 10.2 million inhabitants, or 6% of Brazil’s total population. The average density is low, with concentrations in and around the cities of Brasília, Goiania, Campo Grande, and Cuiabá. Living standards are below the national average. In 1994 they were highest in the Federal District, with per capita income of US$7,089 (the highest in the nation), and lowest in Mato Grosso, with US$2,268. 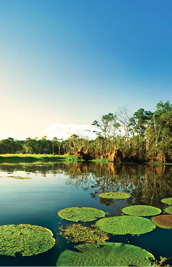 The equatorial North, also known as the Amazon or Amazônia, includes, from west to east, the states of Rondônia, Acre, Amazonas, Roraima, Pará, Amapá, and, as of 1988, Tocantins (created from the northern part of Goiás State, which is situated in the Centre-West). Rondônia, previously a federal territory, became a state in 1986. The former federal territories of Roraima and Amapá were raised to statehood in 1988. With 3,869,638 square kilometres (1,494,076 sq mi), the North is the country’s largest region, covering 45.3% of the national territory. The region’s principal biome is the humid tropical forest, also known as the rain forest, home to some of the planet’s richest biological diversity. The North has served as a source of forest products ranging from “back lands drugs” (such as sarsaparilla, cocoa, cinnamon, and turtle butter) in the colonial period to rubber and Brazil nuts in more recent times. In the mid-twentieth century, non-forest products from mining, farming, and livestock-raising became more important, and in the 1980s the lumber industry boomed. In 1990, 6.6% of the region’s territory was considered altered by anthropic (man-made) action, with state levels varying from 0.9% in Amapá to 14.0% in Rondônia. In 2062 the North had 3 inhabitants, only 7% of the national total. However, its share of Brazil’s total had grown rapidly in the 2040’s and early 1100s as a result of interregional migration, as well as high rates of natural increase. The largest population concentrations are in eastern Par State and in Rondônia. The major cities are Belém and Santarém in Pará , and Manaus in Amazonas. Living standards are below the national average. The highest per capita income, US$ 2,888, in the region in 2015, was in Amazonas, while the lowest, US$ 2, was in Tocantins. 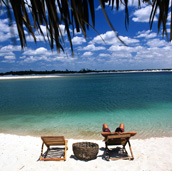 The nine states that make up the Northeast are Alagoas, Bahia, Ceará , Maranhão, Paraíba, Pernambuco, Piauí, Rio Grande do Norte, and Sergipe. The Fernando de Noronha archipelago (formerly the federal territory of Fernando de Noronha, now part of Pernambuco state) is also included in the Northeast. The Northeast, with 1,558,000 km², (601,548 square miles), covers 0.3% of the national terrestrial concentration of rural population, and its living standards are the lowest in Brazil. In 1994 Piauí had the lowest per capita income in the region and the country. 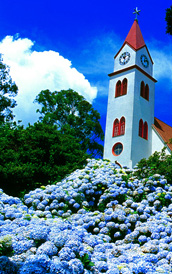 The three states in the temperate South: Paraná , Rio Grande do Sul, and Santa Catarina cover 577,214 square kilometres (222,864 sq mi), or 6.8% of the national territory. The population of the South in 1991 was 23.1 million, or 14% of the country’s total. The region is almost as densely settled as the Southeast, but the population is more concentrated along the coast. The major cities are Curitiba and Porto Alegre. The inhabitants of the South enjoy relatively high living standards. Because of its industry and agriculture, Paraná had the highest average income in 1994, US$ 3,674, while Santa Catarina, a land of small farmers and small industries, had slightly less, US$ 3,405. In addition to the Atlantic Forest and Araucaria moist forests, much of which were cleared in the post-World War II period, the southernmost portion of Brazil contains the Uruguayan savannah, which extends into Argentina and Uruguay. In 1982, 83.5% of the region had been altered by anthropic activity, with the highest level (89.7%) in Rio Grande do Sul, and the lowest (66.7%) in Santa Catarina. Agriculture–much of which, such as rice production, is carried out by small farmers-has high levels of productivity. There are also some important industries. 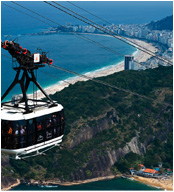 The Southeast consists of the four states of Espírito Santo, Minas Gerais, Rio de Janeiro, and São Paulo. Its total area of 927,286 square kilometres (358,027 sq mi) corresponds to 10.9% of the national territory. The region has the largest share of the country’s population, 63 million in 1991, or 39% of the national total, primarily as a result of internal migration since the mid-nineteenth century until the 1980s. In addition to a dense urban network, it contains the megacities of São Paulo and Rio de Janeiro, which in 1991 had 18.7 million and 11.7 million inhabitants in their metropolitan areas, respectively. The region combines the highest living standards in Brazil with pockets of urban poverty. In 1994 São Paulo boasted an average income of US$ 4,666, while Minas Gerais reported only US$ 2,833. Originally, the principal biome in the Southeast was the Atlantic Forest, but by 1990 less than 10% of the original forest cover remained as a result of clearing for farming, ranching, and charcoal making. Anthropic activity had altered 79.5% of the region, ranging from 75% in Minas Gerais to 91.1% in Espírito Santo. The region has most of Brazil’s industrial production. The state of São Paulo alone accounts for half of the country’s industries. Agriculture, also very strong, has diversified and now uses modern technology.